Attention has become the key building block of neural sequence processing models, and visualising attention weights is the easiest and most popular approach to interpret a model’s decisions and to gain insights about its internals. Although it is wrong to equate attention with explanation (Pruthi et al., 2019; Jain & Wallace, 2019), it can still offer plausible and meaningful interpretations (Wiegreffe & Pinter, 2019; Vashishth et al., 2019; Vig, 2019). In this post, I focus on problems arising when we move to the higher layers of a model, due to lack of token identifiability of the embeddings in higher layers (Brunner et al., 2020). I discuss the ideas proposed in our paper for visualising and interpreting attention weights taking this problem into account!

Here, I explain two simple but effective methods, called Attention Rollout and Attention Flow, to compute attention scores to input tokens (i.e., token attention) at each layer, by taking raw attentions (i.e., embedding attention) of that layer as well as those from the precedent layers.

In the Transformer model, in each layer, self-attention combines information from attended embeddings of the previous layer to compute new embeddings for each token. Thus, across layers of the Transformer, information originating from different tokens gets increasingly mixed (Check out the (Brunner et al., 2020) for a more thorough discussion on how the identity of tokens get less and less represented in the embedding of that position as we go into deeper layers.). 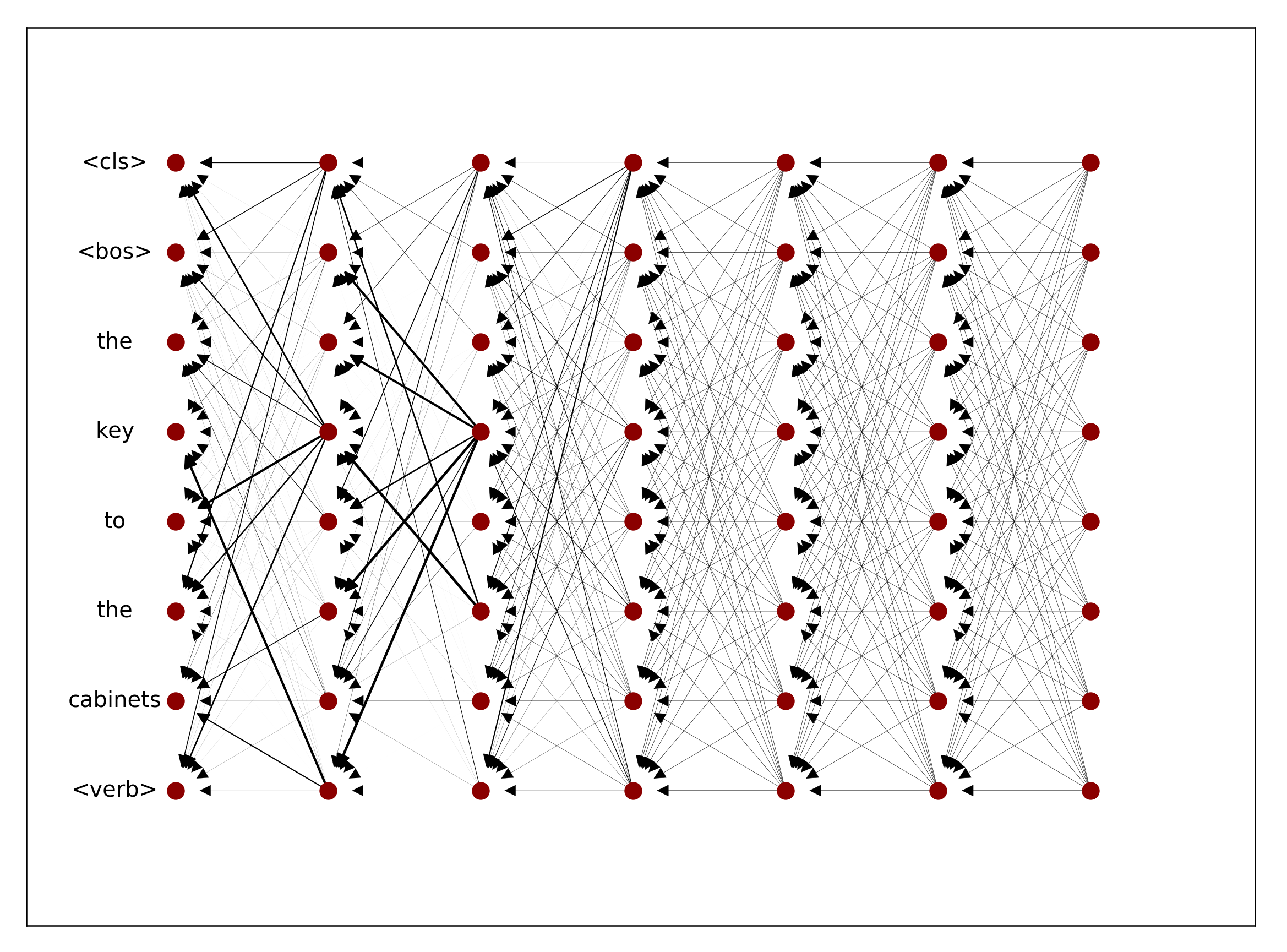 Let’s take a look at the example in the figure that shows how attention weights in a Transformer model change across layers. In this figure, we see the attention weights of a 6-layer Transformer encoder trained on the subject-verb agreement classification task for an example sentence. In the subject-verb agreement task, given a sentence up to its verb, the goal is to classify the number of the verb. To be able to do this, a model needs to recognise the subject of that verb correctly. For the example in the figure, The key to the cabinets <verb>, intuitively we expect the model to attend to the token key, which is the subject of the missing verb, to classify the verb number correctly. Or the token cabinets, the attractor in case it is making a mistake.

So, if we want to use attention weights to understand how a self-attention network works, we need to take the flow of information in the network into account. One way to do this is to use attention weights to approximate the information flow while taking different aspects of the architecture of the model into account, e.g., how multiple heads interact or the residual connections.

Let’s take a look at the schematic view of self-attention layer in the Transformer Model introduced in (Vaswani et al., 2017)(figure below): 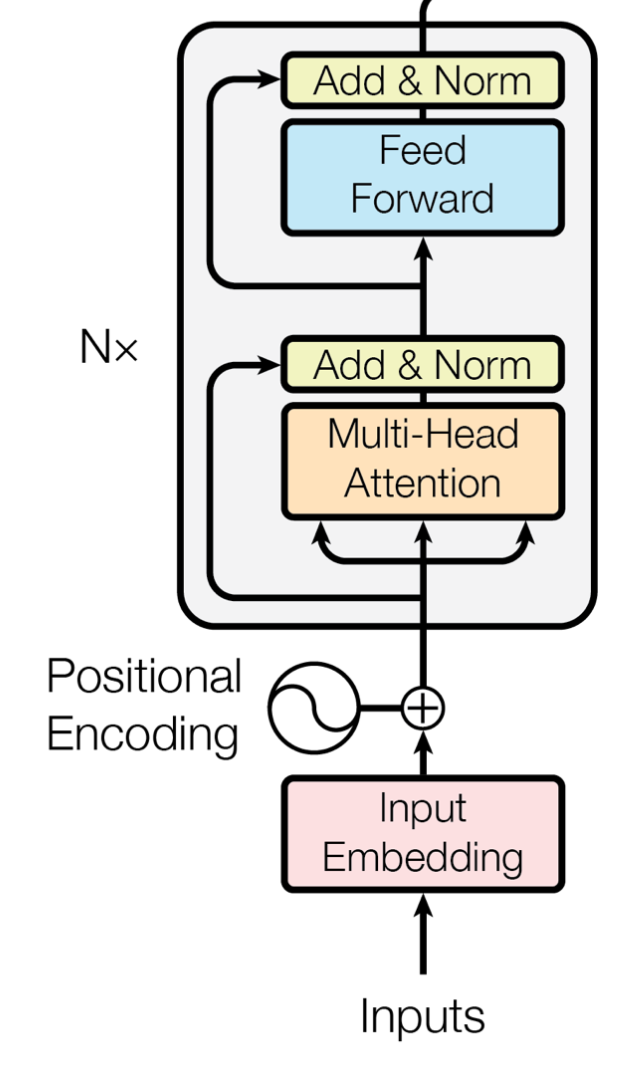 We can model the information flow in the network with a DAG (Directed Acyclic Graph), in which input tokens and hidden embeddings are the nodes, edges are the attentions from the nodes in each layer to those in the previous layer, and the weights of the edges are the attention weights. Note that, we augment this graph with residual connections to more accurately model the connections between input tokens and hidden embeddings.

Given this graph, based on how we interpret the weights associated with the edges, which are the raw attention weights, we can use different techniques to compute the attention from each node in the graph to the input tokens.

In the figure below, we see the same example like the one we saw for the Attention Rollout, except here the attention weights are viewed as the capacity of the edges. Thus, the total attention score of a path is the smallest capacity of the edges in that path. This is a straightforward example, and maximum computing flow can be more complicated when paths overlap.

How does this all work in practice?

Let’s see an example of how these techniques work in practice! Applying these techniques to a pretrained 24-layer BERT model, we get some insights on how the models resolve pronouns. What we do here is to feed the model with a sentence, masking a pronoun. Next, we look at the prediction of the model for the masked pronoun and compare the probabilities predicted for her and his. 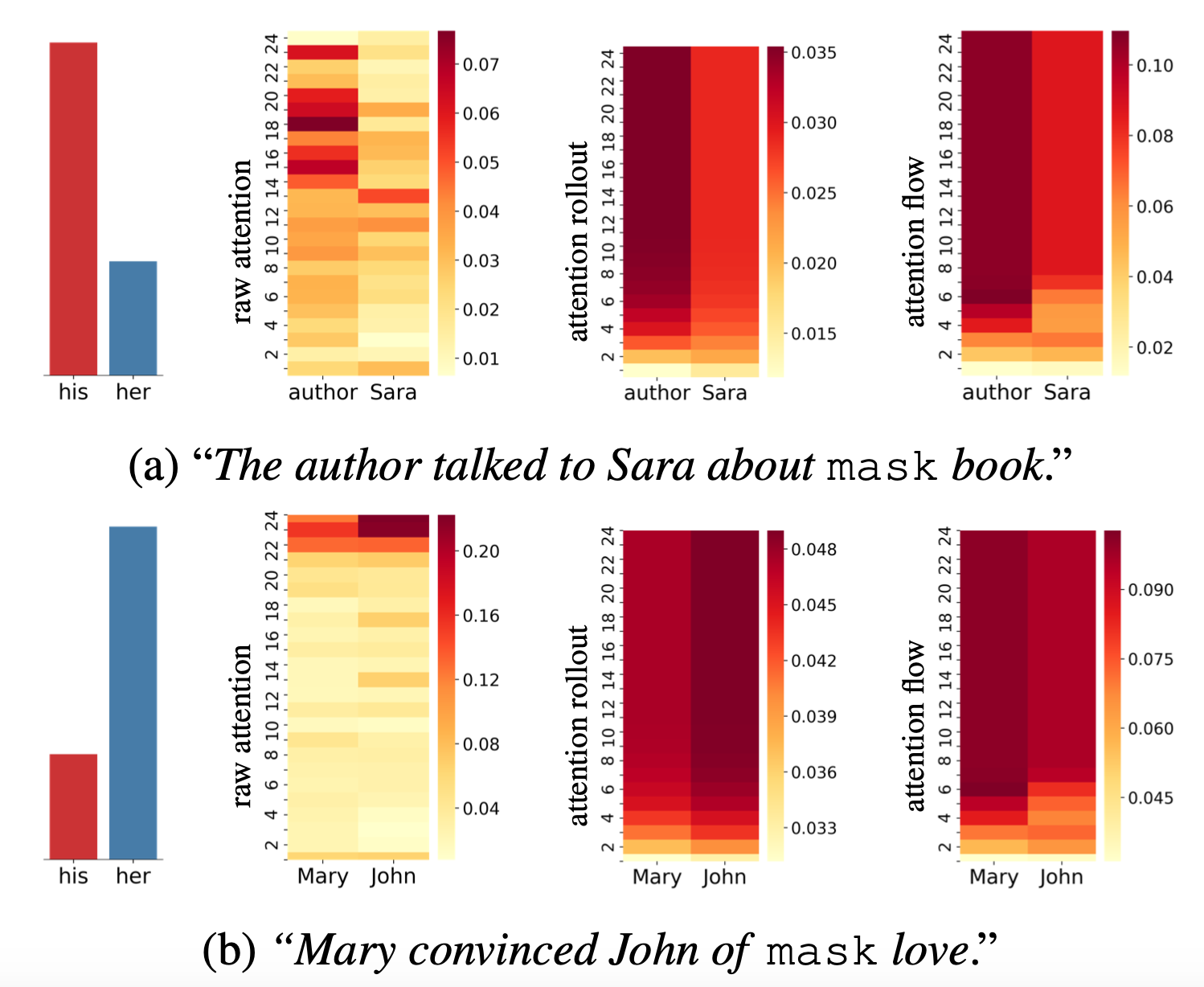 Visualing attention for a 24-layer BERT

As we can see, in the first example (figure a), the prediction of the model is his. Hence, we expect the model to attend to the word author rather than Sara. In this case, both Attention Rollout and Attention Flow are consistent with this intuition. Whereas, the final layer of Raw Attention does not seem to be consistent with the prediction of the models, and it varies a lot across different layers.

Note that, both Attention Rollout and Attention Flow are post hoc methods for visualisation and interpretation purposes and they do not provide new attention weights to be used during training or inference.

To see more examples, you can try out this notebook. And for more details, such as how we can handle multiple heads take a look at our paper, “Quantifying Attention Flow In Transformers”.