Transformers have become the most promising models in machine learning, particularly for solving natural language processing tasks. The fact that Transformer based models do so good raises the question of whether the more traditional neural network architectures for processing sequences, recurrent neural networks (RNNs), are obsolete now?

What is Inductive Bias?

Let’s assume, we are given a task and two models, A and B, with similar expressive power, i.e. the desired solution for the task is realizable for both models. Also assume that model B has a stronger inductive bias toward the solution compared to model A. While model A can eventually learn the solution if we provide it with enough data and computation, model B can achieve this goal with much less data and computation. Hence, designing learning algorithms with proper inductive biases is essential especially when data and compute is limited.

Moreover, in the absence of strong inductive biases, a model can be equally attracted to several local minima on the loss surface; and the converged solution can be arbitrarily affected by random variations, for instance, the initial state or the order of training examples (Sutskever et al., 2013; McCoy et al., 2020; Dodge et al., 2020).

What is Recurrent Inductive Bias?

The inductive bias of RNNs is often referred to as the recurrent inductive bias. Even though this term is used frequently in the literature, I have not been able to find a clear definition for it. Generally, the term refers to any bias that origins from the recurrent architecture. We can distinguish between three main sources of this bias in RNNs:

In contrast to RNNs, Transformers, process the input in parallel. Although a weak notion of order is encoded by positional embeddings, no explicit assumption is made in the connectivity structure of the architecture. Moreover, they have a global receptive field and can access all tokens through self-attention. Finally, standard Transformers are not recursive, they apply the same set of weights on all input tokens, but they don’t do it recursively.

I have done a small experiment to examine the effect of recurrent inductive bias of RNNs in practice. Let’s take a look into it!

The task of subject-verb agreement is proposed by (Linzen et al., 2016) as a proxy for assessing the ability of models to capture hierarchical structure in natural language. In this task, the goal is to predict number-agreement between subjects and verbs in English sentences. Succeeding at this task is a strong indicator that a model can learn syntactic structures. It is shown by (Tran et al., 2018) that the recurrent inductive bias of RNNs helps them to achieve better performance on this task compared to standard Transformers.

To empirically examine the benefits of each of the three sources of the recurrent inductive bias mentioned earlier, we can modify the standard Transformer to have an architecture with specifications that are similar to RNNs. Then we measure how the performance of the models change as we include more aspects of the recurrent inductive bias. These are the three different variants of Transformers we use:

These models are trained to predict the number of the masked verb in a given sentence (binary classification objective). In the plot below, we can see the mean and standard deviation of the accuracy over multiple trials. As we can see, LSTM achieves the best performance and has the least variance. 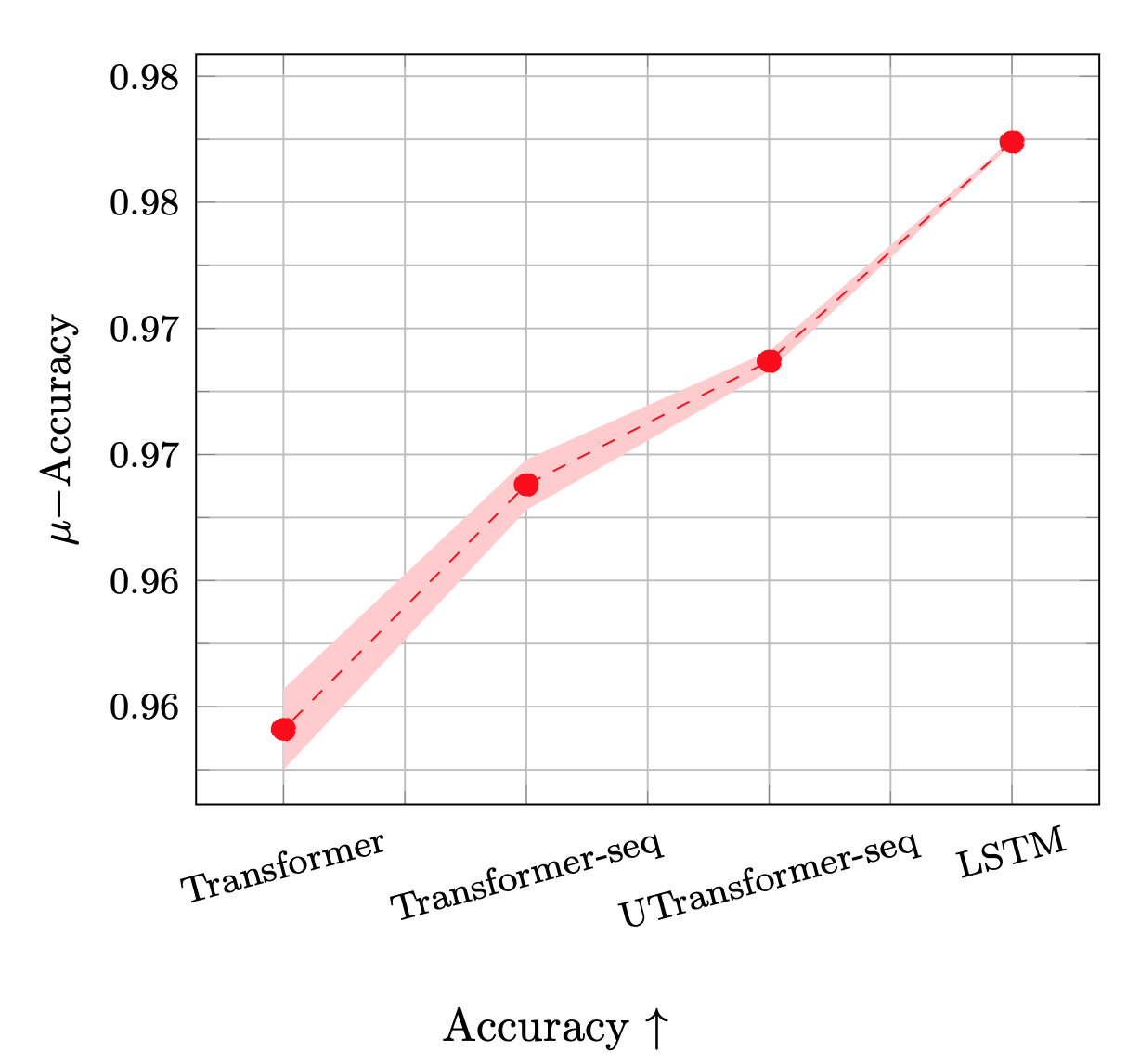 Interestingly, comparing all four models, we find that the performance steadily increases as more aspects of the recurrent inductive bias are included.

As another indicator of the quality of the solutions that different models converged to, we look into their confidence calibration[^af15b0ee]. [^af15b0ee]: Confidence calibration captures how well likelihood (confidence) of the prediction of the model predicts its accuracy. For a well-calibrated model, if we bin the confidence scores and compute the accuracy for each bin, the accuracies are perfectly correlated with the confidence values. The Expected Calibration Error (ECE) is computed as the distance between the calibration curve of the model and the perfect calibration curve. In the figure below, we plot the Expected Calibration Error (ECE) of the models. In line with the trends in the performances of these models, the expected calibration error decreases as we move from standard Transformer toward LSTM. 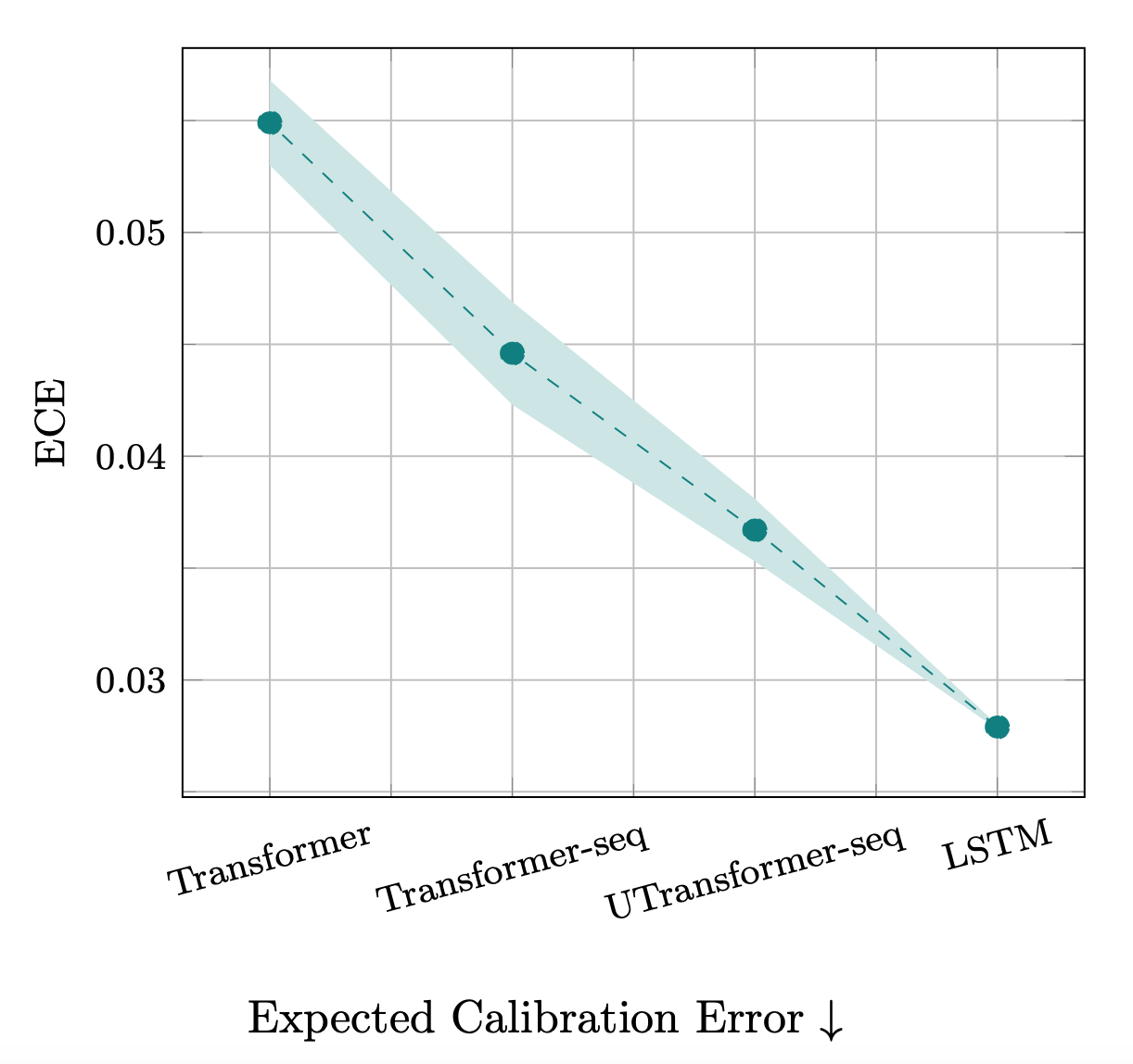 Read more about this in our paper: